According to W3Tech statistics, PHP is used by 80.5% of all websites \[1\] and this share is continuously rising \[2\]. We can safely say that the web “speaks” PHP. But what about the content? Since PHP has been around for such a long time (18 years), its history also tells the story of the evolution of website internationalization. The first article in our series about internationalization programming focuses on PHP internationalization and its different dimensions and options PHP makes possible.

![use of server-side programming languages for websites](//a.storyblok.com/f/42908/442x235/226f62051f/use_of_server-side_programming_languages_for_websites.png)

Back in the days of static websites, the developer would copy the whole site structure as many times as the number of locales that the site supported. The translators would then go deep into the structure to make the changes directly in the pages. This was tedious and error prone. The translator would either need to know the basics of HTML and what should/should not be translated within the HTML file, or the developer would have to pull all the text strings, send them to the translator and then re-insert them back in the proper place. It was not a very friendly or quick process for either developer or translator.

Then came PHP and the dynamic web. In a dynamic website the content is stored in a database or a file system, and is being inserted into templates on each user request. The separation of content, structure and design became a new mantra of web development. When internationalizing the website, two steps need to be taken:

There are various internationalization mechanisms at a developer’s disposal and they differ greatly in their complexity, implementation time, flexibility, efficiency and ease of use for the translator.

Some of these mechanisms can roughly be divided in these groups:

Localizing strings directly in the code

Localization of the text strings can be dealt with directly in the code. The developer writes conditionals that assign values to variables depending on the current language. The translator performs the translation by browsing the code and editing the string values. This produces “messy” code and is not very convenient for translators. Any later changes are hard to make and to track.

Strings can also be pulled from the code/templates. The current language is determined by the program, and a localized string is served.

Storing the strings in a relational database

Another approach to PHP internationalization is to store the static strings in a database. The most simple implementation is to add as many versions of every string or text column as there are supported languages. The specific translations can be retrieved with a single query, so there is no loss of performance. When support for an extra locale needs to be added, the code that pulls the translated string does not have to change much if the naming of the columns is consistent, but every single table containing the translatable content does (new columns need to be added).

Instead of adding extra columns per locale, extra tables can be added. In this case much of the code can be reused, no existing table is altered and new table versions are added for all tables that contain translatable content, in order to translate it to a new locale. When accessing the translated content via SQL, joining the table and its localized version is required. 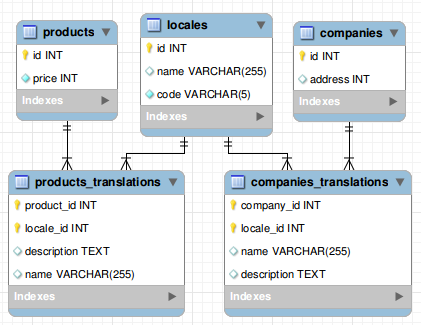 The model can be designed in such a way that no altering of the database structure is needed when a new locale is being added. All translatable content is extracted from the tables to dependent tables that store translated versions in any number of locales. Adding a new locale is as simple as adding a new row to the locales table. The SQL to access the translated strings is not more complicated then in the previous case - a single left join.

All of these implementations have common downsides. The most serious one is a need for developer to implement and maintain an admin interface through which the translator would access and perform translations. Also, a translator would be limited to translating through the given interface unless the developer provided I/O scripts that export to files that the translator could open in a text editor. The translator would have to be careful with the encodings and the format of the file, otherwise there are problems when importing them back into the database.

Associative arrays can be used to add i18n support to a website. If the number of translations rises, the arrays can be divided to one array per file, one file per locale. Still these arrays could get quite large, and the developer has to manually maintain them and synchronize them. However, this is probably the simplest solution for a developer, yet it is not as convenient for translators. Translators still have to be very careful while editing not to mess the array and they have to know how to deal with the encoding. It puts a high technical burden on them.

Storing the strings in JSON

The current prevailing practice is for applications to place text in resource strings which are loaded during program execution as needed. The resource file format most commonly used in PHP projects is Gettext, and it will be visited in detail in the next article. Click here for our earlier article series on localization resource files.

How LingoHub enhances the translation process

As a result, the PHP internationalization process is less of a hassle, automated to a much greater degree, better quality control is available and it is many, many times faster than it used to be. Ask us if you have questions on how you can best internationalize your project, and check out LingoHub to localize your product. Zero overhead, comfortable integrations and scalability as you'd expect it from a cloud service.

Read more about the PHP internationalization programming in the next article.