Reach all your customers with global localization 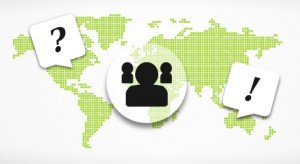 The opportunities of the global market make it imperative for software developers to consider software localization as soon as they begin development. Big software developers like Microsoft, Adobe and Cisco routinely release software that is ready for distribution globally, and so should you. Global localization should be your strategy, and it is easier than you think. When developers limit their markets, they also limit their profit potential. The longer a developer waits to consider the challenge of localization, the bigger the challenge to translators when the process starts.

Localizing a software translates text, colors and images to appeal to the local market where the software is to be sold. It is important to localize to ensure that everything appears intuitive and user-friendly for the target audience. Translation only affects the text used in the program, while localization takes into account every visual and interactive aspect. For example, a translator will ensure that all directions meet the local standard, but won't look at the imagery used. A translator that specializes in localization is able to make recommendations about graphics as well. You wouldn't want to picture cows on an agricultural program for distribution in India. Cows are sacred, and the inclusion could dramatically limit sales potential. Localization helps catch and prevent those sorts of errors, before they become a problem.

Enter the "Cloud" and Program for the Future

Successful developers constantly look for underserved markets that need software solutions. Globalization of the economy makes it more crucial than ever to produce single software solutions that cross country boundaries with ease. Since businesses now operate with employees all over the world, speaking a variety of languages, internal communications are as important as external. Software as a Service programs currently make up a growing part of the world-wide software market. Mobile and Web applications are the fastest growing segment of today's programming industry. Develop software from a 360 degree perspective. Keep in mind the functions customers want, where they live and how to appeal directly to them. Software localization is an important part of making the most of each program. Why spend hundreds of hours developing a program that only sells to those that speak English, when a few additional hours of development net a product that sells to all 6 billion plus people on the planet?

Consider, the English market is filled with software options, and no new users coming on board. Sure, it makes up a big chunk of the software market, 80 percent for locally installed software, but it has a very slim majority of the app market with 51 percent. When you market to mobile users, look for opportunities. Don't compete with long-established producers, instead, develop for underserved markets, like the 49 percent of purchasers who aren't native English speakers. The Chinese market continues to expand rapidly, and developing countries are on target to hit 70 percent market penetration with cell phones in the next few years. Businesses already routinely outsource all sorts of work. It saves them money and increases productivity. What they need is software solutions that work in any country and any language. Think globally and realize global profits. Your customers already operate globally, can you afford to do anything less?