What are ISO language codes?

While there are many published language lists, different lists nowadays greatly depend and take from one another. Here are the most relevant language lists with language codes out there right now.

The Ethnologue is an annual publication, with information on living languages of the world. In 2018, Ethnologue delivered information on more than 7000 languages. This included the number of speakers, locations, dialects, and much more.

Previously, in 1984, Ethnologue, released a three-letter coding SIL system to identify languages it described. The SIL system greatly influenced the ISO 639 language code standards. Interestingly, the Ethnologue has been using the ISO standard since its 15th publication.

ISO language codes are the standard for linguistic codification worldwide. The most famous standard sets are ISO 639 (and the subsets ISO 639-1, ISO 639-2, ISO 639-3) for language codes, and ISO 15924 as standardization of language scripts. We discussed previously the ISO 15924 in our article on languages with dual alphabets. In this article, however, we will focus more on the ISO language codes 639.

Although IETF language tags may seem daunting at first glance, its structure has been standardized by the Internet Engineering Task Force (IETF).

As a result, IETF language tags are used by HTTP, HTML, XML, and many more.

ISO standards were released by ISO (International Organization for Standardization), an international NGO dedicated to creating international guidelines, specifications, requirements etc. Their mission is to contribute to easier processing and distribution of knowledge, information, products and services in general.

In the first place, the idea was to provide language experts with a system that would allow them to identify and tag content with precision. Since then, use of language coding has expanded, and nowadays machine learning and natural language processing depend greatly on proper language codification. Here is how ISO 639 standards work.

The first ISO 639 set includes identifiers for major languages from the world. Consequently, that covers languages that most frequently appear in the world literature and highly developed languages, with a specialized vocabulary and terminology.

The ISO 639-1 standard is a two-character code; one code per language from the original ISO 639 macro language list. The International Information Center for Terminology (Infoterm) is in charge of maintaining the ISO 639-1.

This is a three-character code. The Library of Congress maintains the ISO 639-2.

ISO 639-3 is maintained by SIL International. According to SIL, language identifiers in ISO 639-3 were created with the use in computer systems in mind. The conclusion is that computer systems require a support for a large number of languages - the more, the better.

Additionally, currently in development are:

Although the ISO language code sets cover almost all existing languages, not all languages appear in each ISO 639 part. Here is a comprehensive chart of which type of languages you can find in which ISO 639 set. 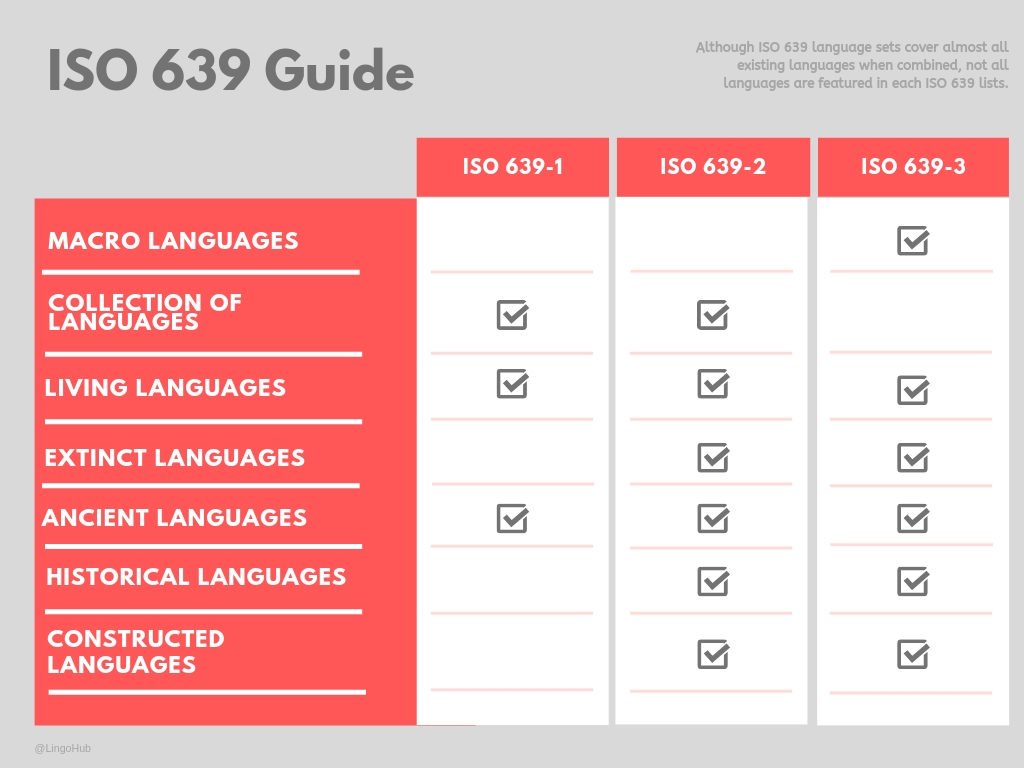 What are Macro Languages?

ISO 639-2 and ISO 639-3 use different criteria for dividing languages. While ISO 639-2 uses as a common denominator shared writing systems and literature, ISO 639-3 focuses on mutual ease of understanding and shared lexicon.

Macro Languages are essentially a mechanism that helps navigating language codes between ISO 639-1,  ISO 639-2 and ISO 639-3.

For example, Chinese is a macro language that includes many languages but which are not mutually easy to understand. Urdu and Hindi do not form a macro language. Consequently, even dialects of Hindi are fall under separate languages.

What are Collective languages?

Collection of languages is not the same as Macro Languages. In its essence, collective languages are language groups that do not satisfy the ISO criteria for a separate language code.

These collections of languages are excluded from ISO 639-3 because they never refer to an individual language, and most collective languages are included in ISO 639-5.

There are four special codes in ISO 639-2 and ISO 639-3 for cases where featured language codes are not applicable.

How to choose the right language code for your project?

Simplicity is often the key, but Macro Languages featured in ISO 639-1 aren’t always the right choice. Here are some things to take into account when choosing the right language code for localization:

Managing language codes can be a daunting task, which is why we have Language Code Support for our LingoHubbers ready. You can check the full guidelines to make the most out of your localization choices in our blog post. Additionally, our comprehensive Language Designators List is regularly updated and easy to navigate.

If you have any doubts, feel free to contact our support team and they will help you make the right choice for your project.

1 7 Tips on how to create Content for multilingual Software
2 How to localize Mobile Apps on a tight Budget
3 New framework support: PHP
4 LingoHub's new Marketplace
5 The Meaning of Colors