This is the number 16 in our series of interviews with translators from all over the globe. Translation is a very diverse industry - we want to introduce some of the people behind making the world a more multilingual place. This episode is an interview with Emeline Jamoul from Belgium.

Can you tell us a bit about yourself?

I’m an English and Spanish to French translator specializing in medicine, marketing & business and IT. I hold a Bachelor in Modern Languages and Literature as well as a Master in French as a Foreign Language. I was born and still live in Belgium, but due to the nature of my Masters, I’m qualified to translate both for the French and the Belgian market. While I’ve been translating for four years now, I’ve started my business, In Touch Translations, in September 2013, so going on seven months now! I’m a social media addict and people can find me on Twitter, Facebook… and I also have a blog!

I fell in love with the English language when I was 13 – the first time I ever went to England, in Canterbury to be more accurate, was simply magical. I can’t quite pin what it was about it that made me love that language and culture so much – maybe the fact that I had itchy feet and that it seemed like one of the most extraordinary things one could do back then? When I was in high school, I had that dream of becoming an interpreter for the United Nations but my teacher took me quickly back to earth when she said that it was a job of a selected few. Not knowing better, I believed her and went on to other more realistic dreams (English teacher). However, that thought was still there. My decision to become a freelance translator was due to a combination of factors: I was pregnant when I graduated and didn’t want to put my child in day care. My pregnancy was a huge game changer, but I also loved the idea of having freedom, of not conforming to any rules but mine (okay, maybe to my client’s too…). That to me is a very precious gift that freelancers have and I wouldn’t want to trade it for anything.

I read a lot – not only blog posts and articles on translation (both from a very theoretical and practical standpoint), but also in my target language. I believe that what makes a good translator is their in-depth knowledge of the language they’re translating into – after all, it’s the final product, isn’t it? As I specialize in marketing and IT, I’ve also taken an Introduction to Marketing MOOC which introduced many key concepts of the field and a few webinars about web writing. You must know the theory behind the texts you’re translating!

As a freelancer and a mother of an 8-months-old baby, it is juggling between work and parenting. It’s not always easy but I wouldn’t change it for anything!

Recently, I had to translate a medical device used to regulate the reproductive cycle of cows. Admittedly, it was not the most glamorous topic but I absolutely loved learning more about it!

You’re one of the hosts of the #BxlTweetUpLab, a one-day event for translators taking place in Brussels. Why should people attend the event?

The event is not your typical conference or workshop. We have designed it to be an interactive session with attendees where they 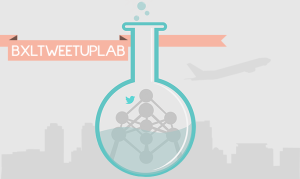 can ask questions and share their opinions. We want to fill the gap that is slowly increasing between translation studies and the industry, and to help translators achieve their objectives. We will cover three topics: blogging & social media, networking and technology hacks that will improve productivity. The presentations will then be followed by a relaxed networking session with people coming from Spain, the UK, France, Belgium… It will definitely be international and is bound to be an interesting day!

Be patient and stay focused on your objective. One way or the other, you will get there. Rome wasn’t built in a day, was it?

Thanks to Emeline Jamoul for the answers!