This is the sixth in our series of interviews with translators from all over the globe. Translation is a very diverse industry - we want to introduce some of the people behind making the world a more multilingual place. This episode is an interview with Constanze Déus of www.condetranslations.de.

Can you tell us a bit about yourself (your background, how long you’ve been translating, where you're from and where people can find you)?

I am a 39-year old translator, I was born in North-Rhine-Westphalia and my native language is German. Yet as a child, I have been fascinated by foreign languages. My family spent almost every summer in France at Côte d’Argent where my grandparents had a small holiday chalet near the beach. I made acquaintance with French children of my age and started to learn French on my own before I took lessons at school at the age of 12. A few years later, I also learnt Latin and Spanish and found good friends in Catalonia – unfortunately we have lost contact for many years now.

For me it was quite clear at a very young age that I would take up a linguistic profession – first I wanted to be a zoo director, later an author and finally a translator. At the age of 19, after having passed my A-level exams with distinction, I got enrolled at Tübingen University and studied Romance Philology (French, Spanish and some Catalan) and General Rhetorics until being awarded my M.A. degree in 1999 (My thesis was about French and Catalan, languages in contact in French Roussillon. An excerpt may be found under my surname from first marriage). I spent two terms abroad as an excellence scholarship holder, one at Universitat Pompeu Fabra in Barcelona and one at Université Toulouse-Mirail, in order to improve my active language and translation skills and intercultural competency.

During my last year at University, I started to work as a part-time translator (French-German) for a pharmaceutical company, BioMérieux, and I learnt a lot about the profession which had been fascinating me since my teenage years when I tried to translate novels from French to German in my spare-time. This job also allowed me to combine my interest for medical issues with my passion for languages. I did not study medicine because I could never imagine to work as a practitioner with all the blood and diseases around me, but I read a lot about medical issues, especially intersexuality (I am not affected, but it’s one of my hobby horses I don’t know why – perhaps because a girl in my old neighborhood seems to be intersexual but never spoke about it).

After my graduation, I had to look for a job and I tried many things, I worked as a proofreader, as an editor for guidebooks, as a multilingual secretary and finally as a translator in the aeronautics industry, where I stayed for almost three years. During this hard time as an in-house worker, I recognized soon that I prefer to work on my own and to make up my own time schedule and the desire to work as a freelancer became stronger and stronger. At the age of almost 35, when I realized that it became almost impossible to find a new job, I finally took the risk and I never have had regrets about this decision which has been the best one in my life – in addition to the decision of divorce in 2002 and of remarriage this year in May.

Added together, I have been working as a translator and a proofreader for more than ten years, six of them as a fulltime freelance translator. My main areas of expertise are medicine, pharmaceutics and tourism, but I also translate contracts and juridical texts (without accreditation). You may find more information about my profile Xing, on proz and of course on my website www.condetranslations.de.

As I have already described above, I got in contact with French people and culture very early in my life and learning languages was easy for me being a child and teenager. Nevertheless, I only learnt English and Romance languages. Other languages fascinate me as well, but it is so hard to learn them! I gave it a try with Arabic one day for personal reasons, but it was quite a frustrating experience.

I like meeting people from other cultures and learning about their way of life. I decided to be a translator because I early evinced talent for this profession which is a vocation for me. When people ask me why I studied “only” Philology and did not choose a special career as a graduated translator and interpreter, I have to tell them that in Germany it is not possible to study translation without interpretation.

And unfortunately, in spite of my aptitude for languages (and complete inaptitude for economics and natural sciences except biology), God played a bad joke on me when he made me stammer at the age of 4 or 5. This is also one of the reasons why I feel best at home being my own boss. I earn my living with the job I like the most and I learn new things every day.

I am constantly learning by doing. Every new job is a challenge. I am also quite active on social media, especially Xing, and I take part in many discussions about the translating profession. I read books in my working languages, English, French and Spanish, but not as often as I should.

I hope to conquer my weaker self and to find time to read more and also to see some movies in my working languages. Over the years, I have been taking some courses in Spanish advanced conversation, commercial English and so on. I have been a member of the BDÜ since 2010 and I regularly read the journal of the association with many interesting insights to the translation industry. 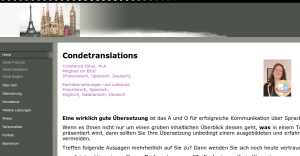 I don’t prepare for a translation project in the narrow sense of the word. When I get a request for quotation, I have a look at the project to see if it matches my areas of expertise and if the deadline is not too tight.

When I accept a job, I firstly skim the whole text and have a look at some terms I don’t understand, and then I translate it sentence by sentence. After having finished translation, I proofread the whole text again and fine-tune linguistic style and expression. I always try to give my very best and most clients are more than satisfied.

Every new job is a challenge, because I am working on several areas of expertise which helps me expand my horizons. It was quite boring to translate only aeronautical texts for three years, always the same stuff which did not really fascinate me. Now I am free to translate whatever I want, as long as I am able to find the right clients who send me exciting inquiries.

I am keen on translating language games. It is not often the case, as I don’t do literary translations (it is paid too badly), but sometimes I find them in travel guides, cultural texts, advertising texts and so on.

And it is really a great challenge to find a language game which works in the target and source language as well. Needless to say that many times, it is not possible, but I never give up and sometimes I think about the solution until falling asleep. Translation of language games is the icing of the cake in our profession.

It always makes me smile when some demanding clients tell me how to do the job and warn me that they are fluent in both languages and could do the job themselves if they had more time. They don’t see that fluency and writing/translating skills are a very different kettle of fish. Or if clients have really silly questions about the basics of French grammar or if they think they have found an error in my translation, but of course it is not true.

Freelancing is a great chance for people who prefer to be their own boss. It is an invaluable advantage to go on holiday whenever you want, to turn down the PC whenever you want and not to be obliged to do your time shooting crazy chickens before being allowed to punch the time clock. You can choose many different jobs from different areas of expertise and therefore avoid boring routine.

The disadvantage of course is lack of social security. There is no paid time off, no maternity leave, no sick-pay, no pension etc. It involves therefore a great risk and a great self-responsibility not to be underestimated. On the other hand, American hire and fire mentality has also started its triumph in Germany and therefore a permanent position in a company until retirement is not sure anymore either. You depend on one single boss and if he fires you, it’s very hard to find a new job.

As a freelancer however, it may always be that you suffer some depression in trade, but it is very improbable that you earn nothing at all if you live from various clients. Customer retention and acquisition is a constant challenge and necessity, but it makes you feel proud when things work out well and if for a few months in series, you earn much more than during your regular jobs ten years ago.

What are you wishes for 2014? What excites you, what are you skeptical about?

I am satisfied with my profession. If a fairy godmother came and asked me about my three wishes, I would probably answer that more regular workload (constant full capacity without frustrating off-peaks in summer and without long extra hours typically before Christmas), a decent sales increase and more jobs from the tourism industry or well-paid literary translations would be nothing to sneeze at.

But I am skeptical about different things: First, the development of machine translation – will it render decent outputs in the next 20 years so that humane translation will become dispensable? What shall I do then? Second, besetting over-regulation of our profession.

Many graduated and/or accredited translators in Germany do not take seriously their colleagues without pertinent formal education, even if they have done academic linguistic studies (which always include a certain number of translation courses) as it is my case. I often feel that I constantly have to prove that I can do the same job as they do – likewise or even better. Therefore I hope that pride of place will take a backseat and that outstanding experience and actual performance of a translator will be everything that matters, no matter which way he or she took to be one.

I would tell them that being a translator is a constant challenge, but a fulfilling one. I would tell them not to expect miracles or to amass riches, but that it is possible to earn one’s living with this exciting and fascinating profession which is a vocation for a lifetime, as far as you charge reasonable rates and are willing to approach almost full capacity.

Thanks to Constanze for the answers!