If you speak more than one language, you will often encounter situations where you switch between them. This is called language switching. Depending on the context, this might happen automatically, or it requires attention (or training in some cases). Especially noteworthy of investigation are business contexts. For many, English is the "lingua franca" of the business world, so switching to and from English in a professional environment feels relatively natural.

A very cosmopolitan friend of mine from Denmark, who spent most of her life in Norway and studying in the US and Japan but currently lives in Berlin, recently posted some thoughts about when she switches to which language in a business context. For her, the two options are business German or English. So when does she switch to business German rather than working in English, let's look at her pie chart: 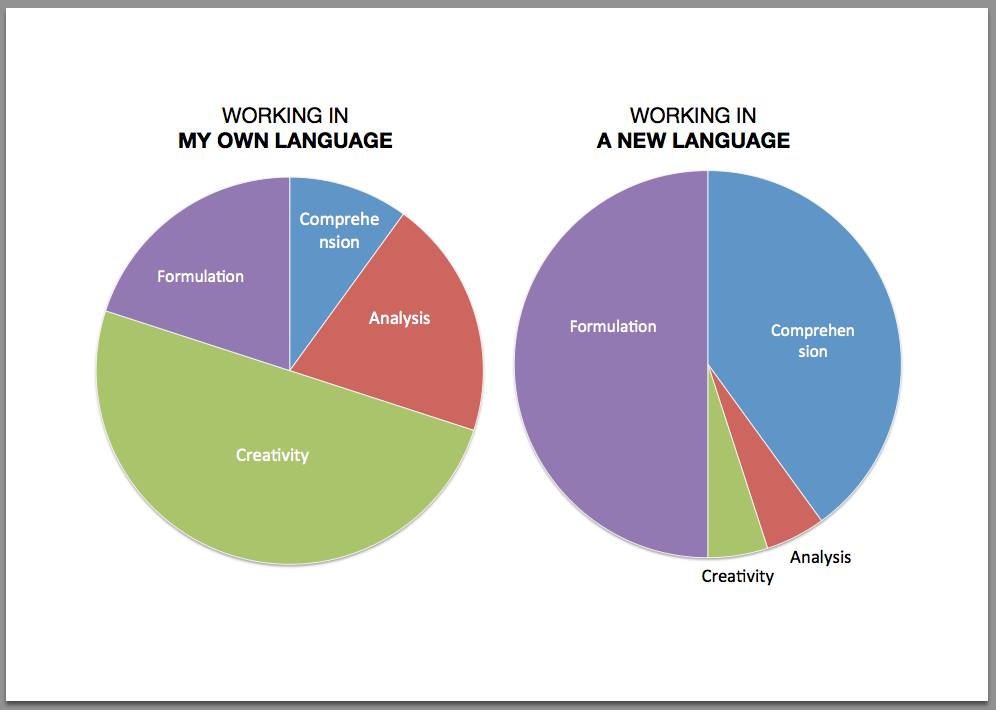 In linguistics it is normally assumed that the non-native language does not occupy the thought process (red and green, i.e. pondering and creative thinking) as much as that of the execution process (purple and blue, i.e. formulation and interpretation). In linguistics, this is a known phenomenon, similar to the fact that people who speak several language will often resort to their native tongue for emotional situations, like intense arguments, cursing or sadness. I presume that one is nearing a level beyond fluency of a secondary language once the creative thinking process - and even dreams - happen in that language as well. For my friend, English however has been very familiar for years, to a degree where she even dreams in English. Her main concern is thus German, which is relatively new.

I would be interested to know how you observe your language use in professional contexts. It is even more interesting if you observe your writing in casual contexts (text messages, Facebook, etc.) versus professional emails. Especially when communicating with other non-native speakers, there is often an automatic process where a common denominator (often English) becomes an automatic norm in a conversation, but it is usually a level of that language that is toned down in complexity. For example: Among a group of people where nobody's native language is English, but it is the common language, the person with the best skills in English will automatically speak a simpler kind of English than he or she would speak compared to a group of people with native speakers present.

Special thanks for the idea and illustration to Anne Kjær Riechert, founder of kidshaveadream.com and associate at the Stanford Peace Innovation Lab.

Email [email protected] to get in touch with us. We welcome guest articles, too. Stay tuned for more and join us on the social networks. Definitely sign up to be part of lingo.io