The business case for localizing apps for the Chinese market

China is huge, not just geographically or in terms of number of people, but especially in terms of business. The country’s impressive growth over the last few years has contributed to the rise of a new middle class, impressive advances in technology and living standards, and booming demand for consumer electronics and web services. For so-called “western” software companies, it is still a daunting task to expand to China. Apple has just signed a deal with China's biggest mobile operator China Mobile and will finally be able to sell its devices on a broad scale all over the country in their stores. Even though there is some scepticism whether Apple will be successful without a low-cost phone on offer, this deal is huge, not just for Apple but for the spread of iOS software on the Chinese market in general. More companies small and large need to follow in Apple's foot steps, reaching into this promising market. This article argues that it is worth taking this step. Translating your website or software into the major Chinese language will open up huge opportunities. Here is why.

Internet use in China

The number of internet users in China has already surpassed the population of nearly every other country - 591 million by the end of June 2013 which is a growth of 26.56 million since the last year (Statistical Report on Internet Development in China, July 2013). By the end of September 2013, 13 million new users had joined Chinese internet population reaching the number of 604 million since June the same year (internetstatstoday.com, 2013)! The entire population of the United States is about 320 million.

As for the mobile internet, it already grew to 464 million users there (a growth of 43.79 million since 2012 according to the Statistical Report on Internet Development in China, July 2013). By comparison, in the United States there are around 255 million internet users (data.worldbank.org, 2013) in total. What is more, 66% of all netizens in 1996 were located in the U.S. (http://www.statista.com/, 2013). Today, United States are home to "only" 13% while China presents 25% of the Internet population.

Furthermore, although the average US internet user spends about 32 hours per week online in comparison to the Chinese 20.5, the total value of online sales has a growth of only 15.8% there while the value of online sales in China is growing by an incredible 64.7%! A point of saturation is yet far off, as more retail sectors are making a transition online, and more services are penetrating the web and mobile market, with spread of devices still growing rapidly. 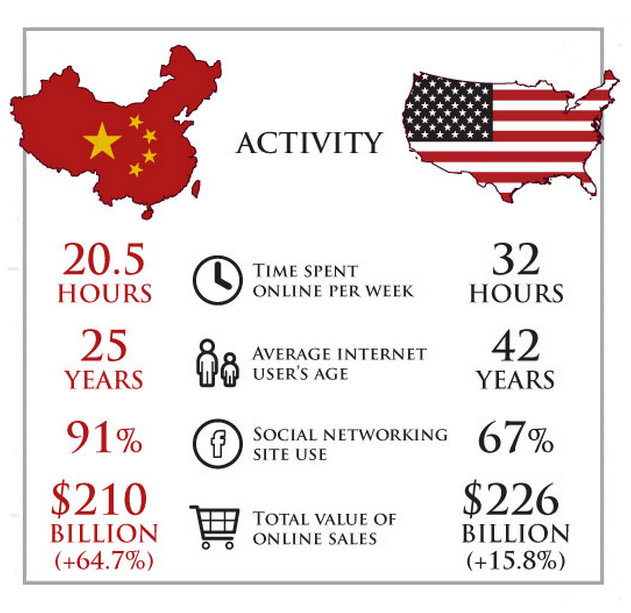 Internet penetration by regions in China 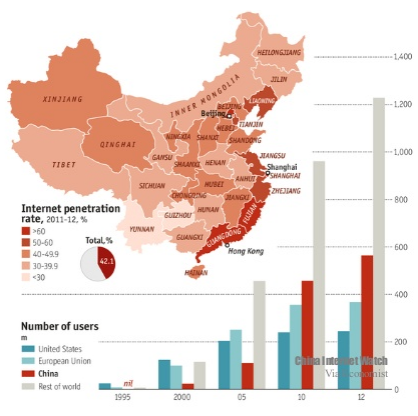 Languages on the Internet

In 2000, more than 50% of all Internet content was in English. This number had decreased to 32% in 2005 (griffith.edu.au ) and continued declining to 26.8% in 2011 while Chinese content increased to 24.2% compared with 5.4% 14 years ago (www.star-ts.com, June 2012). This is not a very surprising fact taking into the consideration that more than a billion people speak Chinese while English speaking population counts around 508 million people (listverse.com, June 2008).

Top 5 languages on the Internet

Languages of the Internet 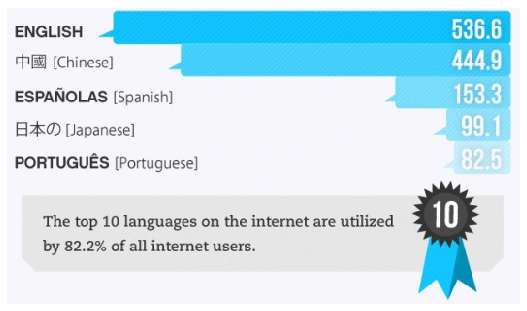 Apps and the IT sector in China

China is numerous when it comes to app stores, too - around hundred of them, nevertheless 20 are major players (such as AppChina, Anzhi, Gfan, Hiapk, Liqucn,Wandoujia, eoemarket, and 91Market). However, worth keeping in mind is the fact that Chinese market is very turbulent and today’s app store leader can tomorrow be trailing behind. As for mobile applications, only in 2012 730.000 Chinese apps were launched on the iPhone, iPod Touch and iPad platforms which is twice as many apps that reached the US app store in the same year (qz.com, January 2013). Most of the applications available globally are in French (50%), however, more than 25% of all iPhone and Android applications are already in Chinese compared to English ones which present less than 10% of all applications (www.icanlocalize.com, October 2010), and these numbers are over three years old.

The interesting fact about app usage is that Chinese users are more willing to pay for content and are less price sensitive than US customers who stated price as the key criteria when deciding whether to download an app or not (appscend.com, September 2013).

Finally, sales revenue of China's IT market hit around 2.04 trillion US dollars in 2013, growing 14% per year. The sector has a stable growth and it is a world leader when it comes to mobile phones, computers ad TV sets production (news.xinhuanet.com, November 2013)

Most popular languages for iPhone and Android localization

As one of the BRIC countries, China's potential will keep increasing, supported by both population expansion and technology gains. As a growing part of its enormous population enters the Internet world, China is establishing itself as a market in the global competition that will surpass all others in importance. Localization into the Chinese language is crucial in order to conquer the high growing market, and getting this ticket not only leads to higher brand awareness, customer portfolio and revenue, it might well be that placement of your product on the Chinese market will decide success or failure of your business. Say ni hao to China.